San Diego’s coastline features fascinating geological landscapes, including centuries-old rock formations that house stunning sea caves. The most famous (and easily accessible) are the La Jolla sea caves, with rich marine life in the surrounding waters. Most of these caves are only accessible by water, but a few can be reached by land.

It is important to look up the tide and weather beforehand, to ensure a safe visit as well as to make sure you can actually access the cave itself.

Here is a complete guide to visiting the sea caves in San Diego, including the seven La Jolla sea caves, the Sunset Cliffs Open Ceiling Sea Cave, and the Secret Sea Cave at the Cabrillo National Monument. 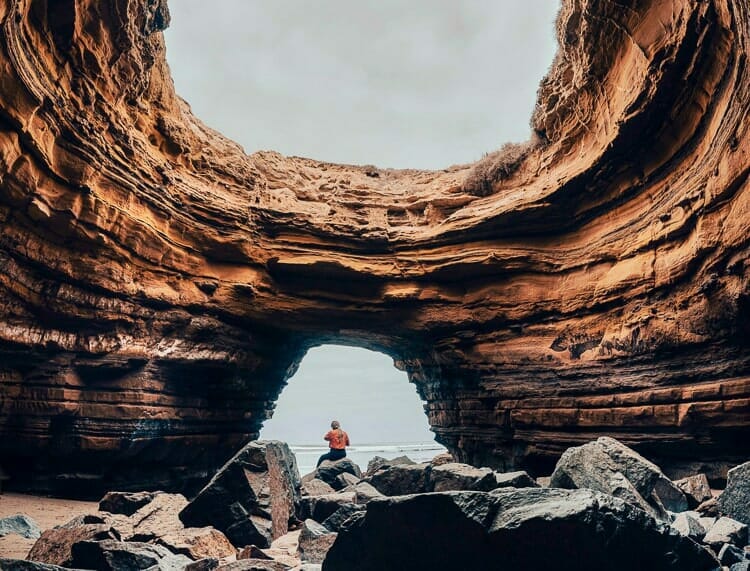 The sea caves in San Diego are a local natural phenomenon that is worth visiting!

These sea caves are located as a coastal border for the offshore San Diego-La Jolla Underwater Park Ecological Reserve, which is a popular place for snorkeling, kayaking, and swimming. They are located between La Jolla Shores Beach and La Jolla Cove Beach. Sunny Jim Cave is the only sea cave accessible by land while the rest can be reached by kayaking or snorkeling.

The sandstone bedrock that the cliffs were carved into along the shore is part of the Point Loma Formation which is part of the larger Rose Canyon Fault Zone in San Diego. The formation of these cliffs dates back to the Late Cretaceous Period, which is roughly 70 to 80 million years ago. So these cliffs have been around for a long time.

This cave is the most popular of the seven due to its easy land accessibility and is the 2nd deepest sea cave at around 320 feet deep. It can be reached through The Cave Store, which has offered tours of the cave via a bootlegger’s tunnel since the early 1900s and was used as a way to smuggle illegal substances like alcohol and opium, especially during prohibition. The store is the original home of Gustav Schultz, who oversaw the construction of the tunnel by a pair of Chinese laborers.

The tours are around 15 minutes long and are self-guided. Be aware that there are around 145 wooden steps each way, which can be slippery so plan accordingly with proper footwear. Tickets are first-come, first-serve, no advanced reservations are available. Admission is $10 for adults and $6 for youth (3-17). There is limited street parking available. 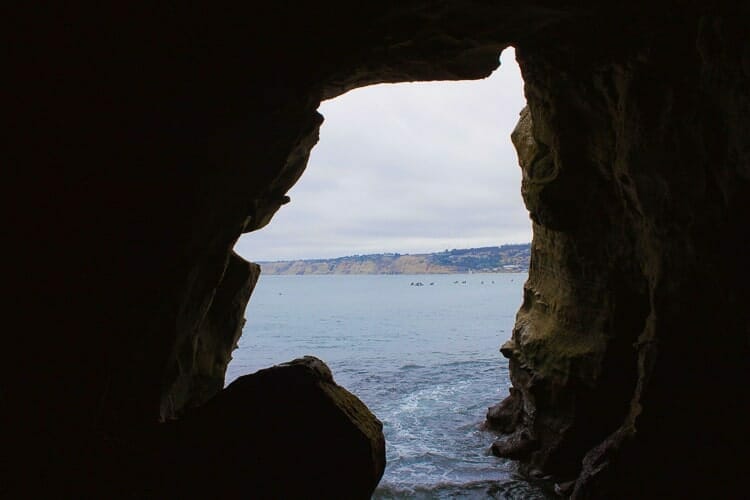 This westernmost cave is the only one visible from the street on Coast Blvd., and is only accessible by kayak and swimming when conditions allow. The name comes from the two entrances on either side that mimics a clam. The position of the cave allows protection from harsh surf.

As local folklore has it, a newlywed couple was visiting from Los Angeles and the wife was tragically swept away by the tide. The waves crashing into the cave were said to remind the husband of his wife’s wedding attire.

The smallest of the caves, this one is often overlooked. It sits next to the White Lady Cave and has a similar structure, but in mini

This cave is known for its spiny lobsters that are in high demand during the limited season of October to March by local restaurants. Lobster traps are no longer allowed in the Marine Protected Area, but are still allowed outside. This cave is the only one that is west-facing, and therefore one of the best places to find lost personal belongings at sea due to the underwater currents.

The deepest of the caves at 600 feet, this cave was created by two caves combining to make a single one with only an arch remaining between them. There are narrow corridors and passageways that can be hazardous and it’s best to be viewed from the water outside.

Unassuming from the outside, this cave opens up to 80 feet of passageway within its perimeters. The walls are an orange hue due to the rock deposits and there is a pool that contains calcite-crusted sea anemones inside its depths.

Not considered one of the seven caves, this cave is adjacent to La Jolla Cove Beach and is a popular spot for California sea lions. During low tide you can walk through it, just be aware of the surf. There are also small tide pools worth checking out. 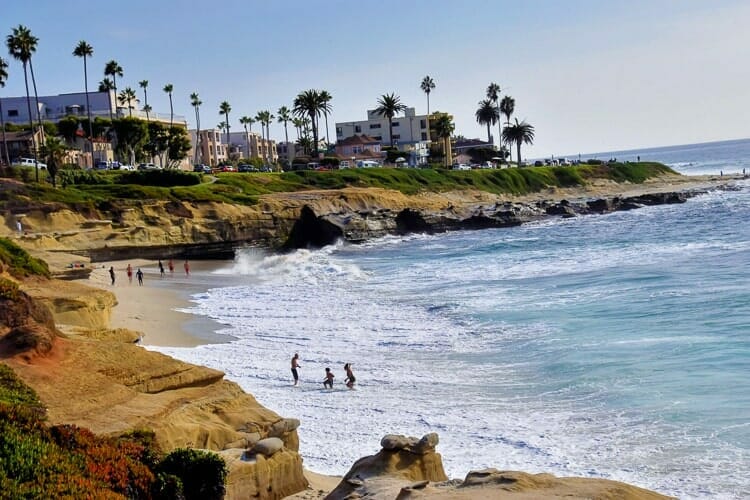 One of the best ways to see the La Jolla sea caves is by taking a guided kayaking tour. Hop in a single kayak or if you have a party of two take advantage of the tandem kayaks available. Entrance into the caves is weather permitting. During the summer keep your eyes out for harmless leopard sharks in the area. In the winter, there’s the possibility of seeing gray whales on their migration from Alaska to Baja California.

There are many tour operators in the area, and two highly reputable ones are La Jolla Kayak and Everyday California.

Snorkeling can be another great way to experience the La Jolla caves and the local marine life, including friendly harbor seals. If you are a beginner, it’s recommended that you go with experienced tour guides. The only criterion is that you know how to swim.

A popular option is a combination guided kayak/snorkeling tour, where you get to kayak around the caves and then snorkel in the reserve afterward.

There is also the option to go view the caves on your own, but this is only recommended for more experienced kayakers and swimmers who feel confident navigating the waters around the La Jolla Ecological Reserve. For swimmers, the easiest entry point is at La Jolla Cove since there are few waves and the waters are shallow. Note that the only place to launch a kayak is La Jolla Shores, not La Jolla Cove since it’s part of the reserve.

Additional Things To Do Around the La Jolla Sea Caves

If you plan on spending a full day or more in La Jolla, here are some more attractions located nearby the sea caves: 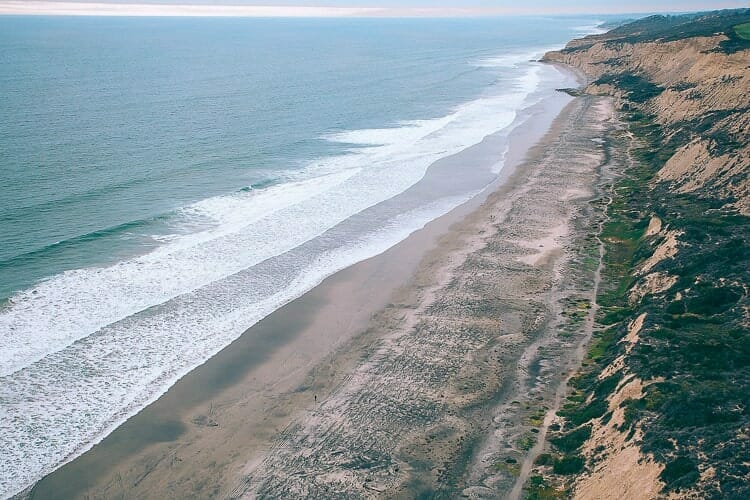 This massive open ceiling sea cave in Point Loma’s Sunset Cliffs neighborhood is worth visiting to experience its sheer size. Note that the cave is only accessible during negative tide, otherwise, it can be extremely dangerous. No matter how low the tide is, you will get your feet wet so bring waterproof shoes. If you are able to line up your visit with sunset, you will be treated to a spectacular front-row seat to the sun dipping into the Pacific through the main entrance.

For directions, it’s recommended that you enter Luscombs Point into your GPS and find street parking in the surrounding residential area. You will see the large gate that blocks off the top of the cave. To get to the cave you need to go to the end of Luscombs Point (where surfers go down to enter the water). For a detailed description of the trail, check out this California Through My Lens post. 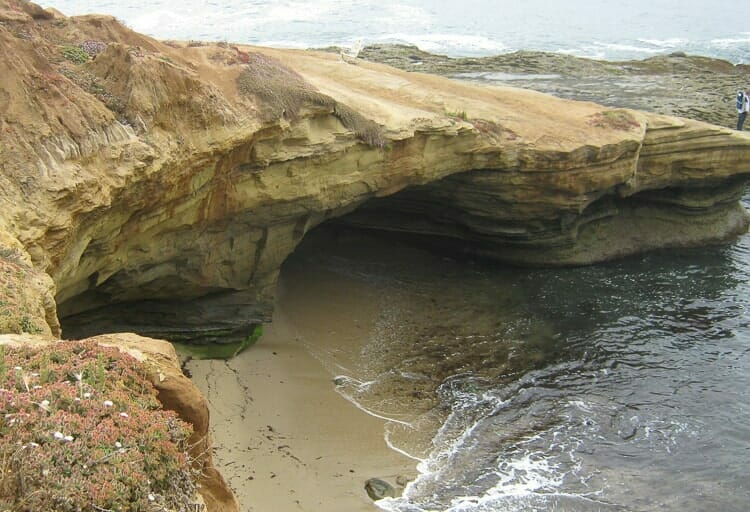 A lesser-known sea cave exists at the southern end of Point Loma in this beautiful seaside national park. The trek to the sea cave is difficult and can only be reached during low tide or else it will be flooded and inaccessible. There is no marked trail, instead, you have to find your way with the use of landmarks. This detailed post from The Last Adventurer describes how to find your way to the cave. Safety travel tip: stop by the Visitor Center and ask a ranger if the tide is low enough to enter the sea cave. 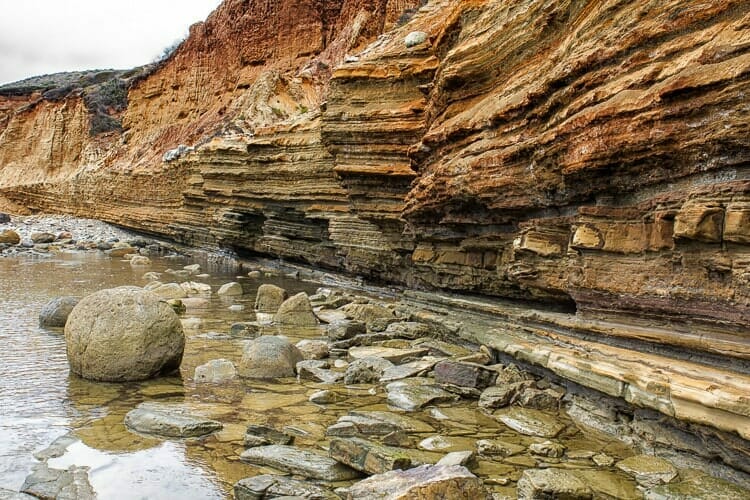